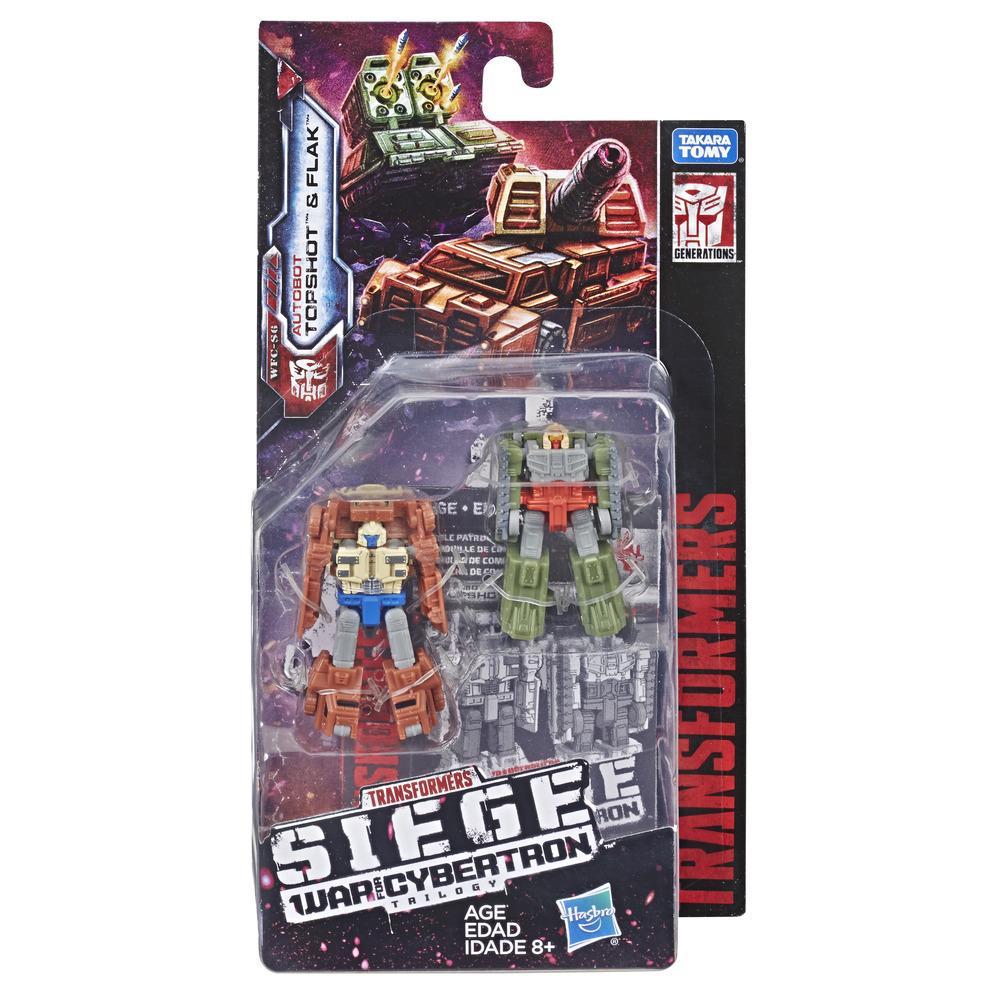 Build the ultimate battlefield with Transformers War for Cybertron Siege figures. Siege plunges fans into the epic fight to survive on the final day of the Autobot and Decepticon battle to control Cybertron. The Decepticon resistance army and the Autobot counter-resistance fighters gear up with the universe's most advanced modular weaponry, including the weapon modes of combined Micromaster figures -- sentient bots that combine to form weapons. The WFC-S6 Autobot Battle Patrol figures Autobot Topshot and Flak convert in 7 and 4 easy steps from robot mode to tank modes. Their tank modes combine to form the Electroverge Neuro Blaster weapon accessory. Use the weapon mode to equip other Siege figures (sold separately) with larger mission loadouts and use Fire Blasts (not included, sold separately with Battle Masters figures) to simulate blasterfire or explosions firing from the end of the Electroverge Neuro Blaster weapon mode. Transformers and all related characters are trademarks of Hasbro. Includes 2 Transformers Generations War for Cybertron: Siege WFC-S6 Autobot Battle Patrol figures and instructions.

BUILD THE ULTIMATE BATTLEFIELD - The Generations War for Cybertron trilogy introduces an expansive ecosystem of collectible figures. (Each sold separately. Subject to availability). War for Cybertron: Siege plunges fans into the epic fight to survive on the final day of the Autobot and Decepticon battle to control Cybertron. The time of peace is gone. Cybertron is a war-torn battlefield, overrun by the fighting between two factions: the Decepticon resistance army and the Autobot counter-resistance fighters. Soldiers on both sides gear up with the universes most advanced modular weaponry, including the weapon modes of combined Micromaster -- sentient bots that combine to form weapons. Imagine this epic battle coming to life with living weapons! One minute Micromaster figures are tiny unassuming bots, and the next they combine to become awesome weapon accessories that can equip Deluxe, Voyager and Leader Class figures! (Each sold separately. Subject to availability.)

FEATURING CLASSIC G1 CHARACTERS  Experience classic G1 characters through the lens of the War for Cybertron: Siege story. The Siege line offers thrilling throwbacks to G1 toys and exciting play patterns for all generations. Fans will remember the iconic character combos of Micromaster action figures and kids will love the micro size and exciting team-ups! Adult fans nostalgic for the original Transformers animation can explore a new chapter of Transformers lore, while young kids can discover classic characters for the first time. Share the experience across generations by uncovering the epic story of War for Cybertron together.

ADD BATTLE EFFECTS WITH FIRE BLASTS ACCESSORIES  Micromaster action figures are compatible with Fire Blasts accessories (Not included. Included with Battle Masters. Sold separately. Subject to availability). Attach Fire Blasts to the ends of Micromaster figures in weapon mode or to the weapon accessories that come with other War for Cybertron.