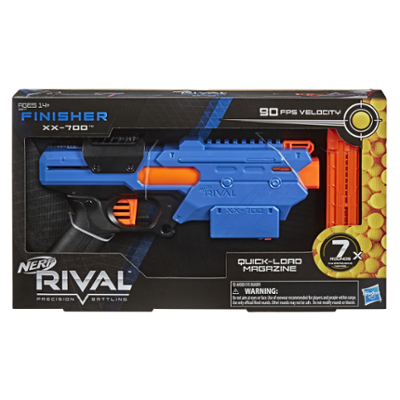 The Nerf Rival Finisher XX-700 blaster features a quick-load magazine for a fast way to reload rounds! A door on the side of the 7-round magazine slides all the way open, giving you easy access to load multiple rounds quickly. Remove the empty magazine from the blaster, fill it with rounds, replace it in the blaster -- and get back to battling! You can also load rounds through the top of the magazine, so you have 2 ways to refill it. Move the slide backward and forward to prime the blaster, and press the trigger to fire 1 round.

SINGLE-SHOT BLASTER WITH PUMP-ACTION PRIMING: Pump the slide backward and forward to prime this Team Blue spring-action blaster, and press the trigger to fire 1 round