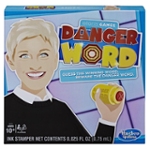 Danger Word is a wildly funny, intense, and unpredictable word guessing game based on the Danger Word Game seen on the Ellen DeGeneres Show and her primetime hit, Game of Games. Players choose a card and give teammates one-word clues hoping that they'll guess the Winning Word on the card. But don't say the Danger Word! Who can get teammates to say "pool" but not "swim", or "infant" but not "baby"? Saying the Danger Word gets that player stamped with an X. Teams win by collecting 5 cards or if the other team gets 3 stamps.

Hasbro Gaming and all related terms are trademarks of Hasbro.