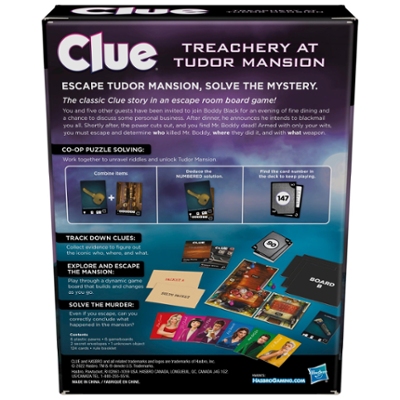 You're a guest at Mr. Boddy's mansion when suddenly you hear a shriek, the lights go out and you find Mr. Boddy dead! You and your fellow players are then put to the ultimate test: Work together to escape the mansion, as well as determine who killed Mr. Boddy, where they did it, and with what weapon. The Clue Treachery at Tudor Mansion Escape & Solve Mystery board game offers classic Clue characters and story in a compelling escape room experience that lets players start playing straight away with limited setup. Players move their pawns around the gameboard that's built room-by-room as they explore the mansion, draw cards, solve puzzles, unlock new rooms and use deduction to uncover clues. After escaping the mansion, players review the clues they've gathered to make a correct accusation and win the game. Gather friends and family together for a game night they won't forget as they immerse themselves in this cinematic, single-play experience. This escape room game is for 1-6 players, ages 10+ and makes a great gift for murder mystery fans. Hasbro Gaming and all related trademarks and logos are trademarks of Hasbro, Inc.