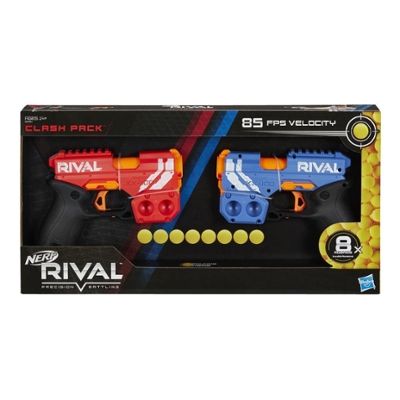 Blast into head-to-head competition with the Nerf Rival Clash Pack! The set comes with 2 Nerf Rival blasters -- 1 in Team Red colors and 1 in Team Blue colors. Choose a team, load the blaster, and start playing! Take along these compact blasters to have an ace up your sleeve for stealth attacks. They’re great primary blasters in Nerf competitions and their compact size makes them an ideal choice as a backup blaster. These spring-action, single-shot blasters pack high-intensity Nerf Rival power in a small size, firing at 85 feet per second. These breech-load blasters have a built-in round storage and come with 8 Official Nerf Rival Rounds. Trigger lock prevents it from firing accidently. Load 1 round, prime, and pull the trigger to fire. Hand-powered (no batteries required).